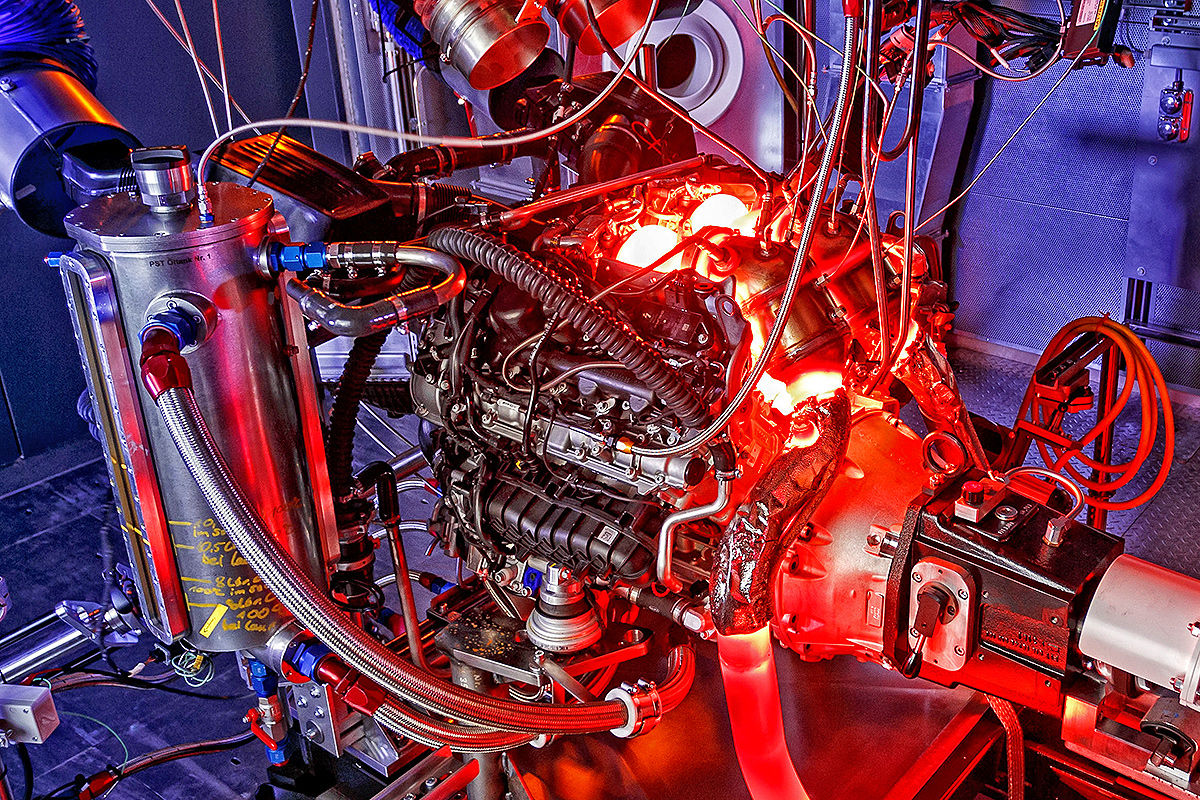 The horsepower and torque figures that automotive manufacturers advertise for their vehicles are always crank numbers. Crank numbers are the HP and Torque values as measured at the engine. To see these values, an engine must be connected to an engine dynamometer (dyno for short). All engine powered accessories such as AC compressor, power steering, alternator, and sometimes even the water pump are removed from the engine for testing. Engine dynos are usually housed in controlled environments to help limit variables that effect engine performance. The engine is brought up to operating temperature and run through the RPM range with the engine dyno applying resistive force to the turning of the crank. This force is called load and it simulates the engine accelerating the car in which it will be installed. The engine dyno, using load, acceleration rate, and a few other variables, measures the power output. Engine dynos are very useful tools in designing and testing OEM equipment and calibrations. Once the engine is installed in a vehicle, it can no longer be tested with an engine dyno.

Measuring power and torque with an engine installed in a vehicle is done with a chassis dynamometer. This is where the second set of numbers, wheel horsepower and torque, come from. Wheel, in the term “wheel horsepower and torque”, comes from the fact that they are values measured at the wheels of a vehicle. In the automotive aftermarket world, HP and Torque gains from tuning and upgrade parts are usually measured with chassis dyno testing. A chassis dyno test requires the entire vehicle to be strapped down on top of “rollers” so that the wheels spin the rollers as though the vehicle is driving. There are a few different types of chassis dynos. Dynojet dynos feature large and very heavy rollers while others such as Mustang and Dyno Dynamics are load based dynos that have small rollers. Dynapack, another common load type chassis dyno is unique in that, instead of rollers, the dyno modules are bolted directly to the wheel hubs.

The Dynojet dynos measure power by being precisely calibrated to the mass and inertia of the roller(s). Load based dynos, on the other hand, function similarly to an engine dyno. Load is applied to small rollers to make it harder for the wheels to turn. Typically, these load values can be and are altered to match the specifications of the vehicle being tested so that the dyno can be a better simulation of on road driving. To have load control on a Dynojet dyno, Dynojet offers eddy current upgrades for their dynos. Both types of dynos measure acceleration, time, engine rpm, atmospheric conditions, and roller speed to generate test results. Despite the similarities, results from different dynos quite frequently vary due to calculation methods and conditions which is why it is best to stick to using the same dyno and comparing before and after results on the same car instead of different cars on different dynos.

While related, the crank numbers and wheel numbers are quite different. The difference comes from what is called “drivetrain losses”. To put it simply, part of the engines power is used to operate the transmission, turn the driveshaft(s), turn differentials, and spin the axles/brake discs/wheels. The engine power that is used to move all the components listed varies depending on transmission type (automatic vs manual vs DCT vs MCT vs etc.), drive type (RWD, FWD, AWD) and the general weight and dimensions of all the components. Many times, people try to put a simple percentage to drivetrain loss.

It is because of drivetrain losses that a 2012 C63 AMG Black Series with an advertised 510 HP typically measures around 400 HP at the wheels on a Dynojet dyno.

This commonly causes confusion and questions such as:

“It makes 510 HP stock, why is it that the dyno says it made only 470 HP after I installed long tube headers and had the ECU tuned, why did it lose power?”

Conversely, some of the new Turbo and BiTurbo AMG models measure at the wheels, power numbers that are quite close to the crank numbers that are advertised further adding to the confusion.  Drivetrain losses are still present and largely unchanged from previous models.  The reduced gap between crank numbers and wheel numbers on these vehicles is a result of a practice that is known as “underrating”. The practice goes back to the muscle car wars where manufacturers advertised lower numbers to help combat rising insurance rates for high powered vehicles.

In most cases the truth is nothing is wrong if a dyno shows that the vehicle is making a lower number than what is rated by the manufacturer or if your dyno numbers are significantly different than a similar vehicle tested on a different dyno.  Drivetrain losses are a natural and unavoidable aspect of automobiles.  Over time, with use of lighter materials and more efficient transmission/drivetrain components drivetrain losses have been improved to the point at which they currently are.  For a long time, Dynojet has been the industry standard in measuring power at the wheels.  Certain patterns became apparent with the Dynojet dynos which led to the common 15% (2WD) and 25% (AWD) drivetrain loss rules.  These rules are usually applied to manual transmission vehicles as automatic transmission vehicles are prone to more losses because of torque converters and more complex internal components.  The rules, however, are not absolute or 100% accurate. Transmission type, wheel and tire size, driveshaft weight, brake rotors, etc. all influence the drivetrain losses.  It is best to understand that the common rules are purely for estimates and that the best use of dyno testing is to measure before and after results on a specific vehicle on the same dyno.

Advertised gains are estimates of HP and Torque “at the engine” calculated from gains as measured on a dynamometer in ideal conditions and typically show the largest possible change. Actual gains are dependent on the following:

Weistec Engineering has a Dynojet 424xLC Linx dyno. It is a linked 4WD dyno with the load control eddy current module.

We chose to go with a Dynojet 424xLC Linx dyno for the following reasons: